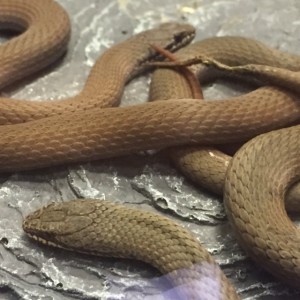 Average time to death is 12 hours. The urban myth that you are bitten in the yard and die before you can walk from your chook pen back to the house is a load of rubbish.

While not new, the management of snake bite (like a flood/fire evacuation plan or CPR) should be refreshed each season.

Let’s start with a basic overview

There are five genus of snakes that will harm us (seriously).

Browns, blacks, adders, tigers and taipans (NB In Tasmania there are three species of poisonous snake – the tiger snake, the copperhead and the white-lipped snake).

All snake venom is made up of huge proteins (like egg white) and when biting, a snake injects venom into the meat of your limb (NOT into your blood).

This venom cannot be absorbed into the blood stream from the bite site.

It travels in a fluid transport system in your body called the lymphatic system (not the bloodstream).

Now this fluid (lymph) is moved differently to blood.

Your heart pumps blood around, so even when you are lying dead still, your blood still circulates around the body. Lymph fluid is different. It moves around with physical muscle movement like bending your arm, bending knees, wriggling fingers and toes, walking/exercise etc.

Now here is the thing. Lymph fluid becomes blood after these lymph vessels converge to form one of two large vessels (lymphatic trunks) which are connected to veins at the base of the neck.

Back to the snake bite site.

When bitten, the venom has been injected into this lymph fluid (which makes up the bulk of the water in your tissues).

The only way that the venom can get into your blood stream is to be moved from the bite site in the lymphatic vessels. The only way to do this is to physically move the limbs that were bitten.

Remember people are not bitten into their blood stream.

In the 1980s a technique called Pressure Immobilisation Bandaging was developed to further retard venom movement. It completely stops venom/lymph transport toward the bloodstream.

A firm roll bandage is applied directly over the bite site (don’t wash the area). 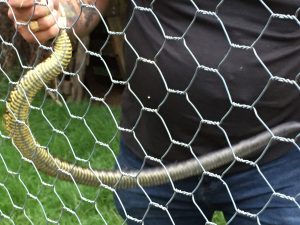 LUCKY ESCAPE: A Tasmanian tiger snake caught by a professional snake handler. DO NOT TRY TO CATCH THE SNAKE YOURSELF.

Step 1 – Apply a bandage over the bite site, to an area about 10cm above and below the bite.

Step 2 – Then using another elastic roller bandage, apply a firm wrap from fingers/toes all the way to the armpit/groin. The bandage needs to be firm, but not so tight that it causes fingers or toes to turn purple or white. About the tension of a sprain bandage.

Step 3 – Splint the limb so the patient can’t walk or bend the limb.

Remember movement (like wriggling out of a shirt or pants) causes venom movement.

DO NOT try to catch, kill or identify the snake!!! This is important.

In hospital we NO LONGER NEED to know the type of snake; it doesn’t change treatment.

Five years ago we would do a test on the bite, blood or urine to identify the snake so the correct anti venom can be used.

Our new Antivenom neutralises the venoms of all the five listed snake genus, so it doesn’t matter what snake bit the patient.

Read that again- one injection for all snakes!

Polyvalent is our one shot wonder, stocked in all hospitals, so most hospitals no longer stock specific Antivenins.

In some snakes severe muscle pain in the limb, and days later the bite site can break down forming a nasty wound.

Allergy to snakes is rarer than winning lotto twice.

Not all bitten people are envenomated and only those starting to show symptoms above are given antivenom.

Did I mention to stay still?